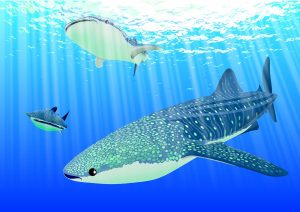 The shark or dogfish is the name commonly given to fish with a cartilaginous skeleton and a hydrodynamic body, belonging to the superorder Selachimorpha. This type of animal is feared by everyone and has over 300 species.
Sharks have been known to have been alive on planet Earth for many years, roughly 400 million years. And yet they manage to surprise researchers. Three species of shark that live in the twilight depths of the ocean are bioluminescent at all times.
The kiefin shark, the black-bellied lantern shark and the southern lantern shark have been found to have a soft glowing blue pattern on their skin. This is a first for sharks that are found in New Zealand.
Sharks
Of these three animals, the kitefin shark, which grows to 180 centimeters in length, is now the largest bioluminescent shark known in the world. Bioluminescence is not an uncommon thing in the evolution of living things. Even humans glow, even if it’s too dim to actually be seen.
This ability seems to be most useful for living beings that live in the dark and deep in the ocean. Places so deep that the sun’s rays cannot penetrate the water.

In a place called the mesopelagic, or twilight zone, which is between 200 and a thousand meters below the surface, bioluminescence is practically a way of life. It is believed that over 90% of all animals in this region of the ocean have some form of bioluminescence that is used in different ways.
However, in sharks this bioluminescence is not documented. And not very studied. Because of this, marine biologists Jérôme Mallefet and Laurent Duchatelet, from the Catholic University of Louvain, in Belgium, are working to change this scenario.
“Bioluminescence has often been seen as a spectacular but unusual event at sea. But considering the vastness of the deep sea and the occurrence of luminous organisms in this zone, it is now increasingly obvious that the production of light at depth must play an important role in structuring the largest ecosystem on our planet”, the researchers wrote.

Bioluminescence
The two marine biologists teamed up with Darren Stevens of New Zealand’s National Institute for Water and Atmospheric Research (NIWA) to conduct a study of mesopelagic sharks that have been found in local waters.
Because of the work done by them, it is known that the kitefin shark is in fact bioluminescent. Before this study, scientists only suspected this fact, since the 1980s.

To make these observations, scientists captured species with a trawl in January 2020. Among the hundreds of sharks captured were 13 kitefin sharks, seven blackbellies and four southern lantern sharks. All of them were used for the study about bioluminescence.
Scientists found in the skin of the three photophores, which is a light-emitting organ seen in bioluminescent animals. In sharks, this light emission is hormonally controlled. Which makes them the only species where this is seen.
Comments

The researchers found that, in all three shark species, melatonin activates the glow. The alpha-melanocyte stimulates this glow, and adrenocorticotropic hormones turn it off.
Even knowing all this, why sharks glow is not an easy thing to determine. After all, mesopelegic animals can shine for several reasons. Whether to attract a partner, attract prey, educate or camouflage.
However, scientists think the sharks’ glow may be for their camouflage. Also because the glow is concentrated around their belly and at the bottom. This can make them invisible from certain angles.
“This first experimental study of three luminous New Zealand shark species provides insight into the diversity of shark bioluminescence and highlights the need for more research to help understand these unusual deep-sea dwellers: the glowing sharks,” concluded the researchers. 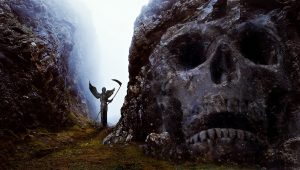 Archeology is the science responsible for studying cultures and civilizations of the past. And it is through archaeological discoveries that traces of ancient societies and cultures are discovered. Thus, it is possible to better understand how a certain people lived, what their habits and customs were. Even what led to its end.

In 2015, an isolated clue to a macabre mystery was found thousands of years ago. The mystery revolved around a single piece.

Finding this skull was not an easy thing. It was well hidden, without the lower jaw, and could only be reached by traversing a difficult passage in the cave called Meander della cattiveria, Labyrinth of Malice translated, and then climbing a vertical axis with a height of 12 meters. The skull was on a rocky ledge.

Because of this difficult access to the site, the speleologists were not able to recover until 2017. It was then that they had the chance to study this ancient and mysterious specimen.

The skull turned out to be really quite old. Radiocarbon dating suggested that it was from a person who lived sometime between 3630 and 3380 BC That time was the Eneolithic period, also known as the Chalcolithic.

In the same region, other eneolithic human remains were found. They weren’t in the cave, but about 600 meters away. Because of that, a larger context makes some sense.

However, the question remains how exactly did this skull get so far from its contemporaries and perch on top of a ledge? According to anthropologist Maria Giovanna Belcastro, from the University of Bologna, several factors were at play.

She was the first author of the new analysis regarding the unusual fate of this skull. Along with her team, she did an investigation into the skull. And they saw that he was probably from a young woman between 24 and 35 years old.

Evidence of various injuries to the sides is likely, the researchers suggest, the result of human manipulations at the time of the woman’s death. Perhaps this is a reflection of the rituals to remove the meat from the skull.

The skull also had other injuries believed to have been made before death. They could have been caused by some wound that killed the woman. In addition to other markings that may be evidence of some type of medical treatment done by your people.

Over time, water seepage may have dissolved the gypsum deposits inside the cave. This caused a vertical pit to be created on the side where the skull was.

“The reactivated cave passage began to evolve downward, with the formation of a side stream that sank and carved out the labyrinth below. This new reactivation was able to entrench approximately 12 meters of plaster, connecting to the lower base level,” the researchers wrote. 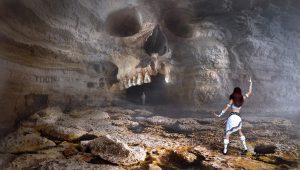 This hypothesis is reinforced by several sediments that were lodged inside the cranial cavity. This suggests that matter was trapped in the skull during the flow of water or debris as the skull moved through the cave.

“The skull would have rolled more easily than other parts of the skeleton in a flow of water and debris runoff… During its decomposition and these dynamic phases, it would have been filled with sediment. Therefore, it would have reached the cave and stopped on the plateau where it was found”, suggested the researchers.

…
Leave a Comment on How did this skull end up alone inside a cave in Italy?